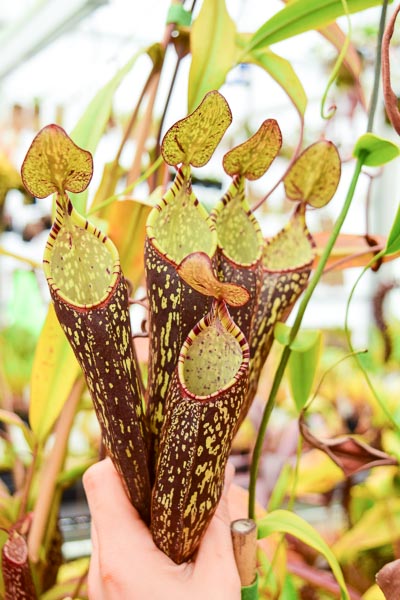 We’re starting a new blog series on plant propagation! To kick things off, we’re doing a deep dive on cuttings and basals.

This post focuses on two forms of asexual reproduction – cuttings and basals.

What is a cutting?

A cutting is a stem or branch cut off of a mature plant. This cutting undergoes a rooting protocol (described below) to become a rooted cutting.

What is a basal?

A basal is an auxiliary growth point on a mature plant. A basal can be removed and, after undergoing a rooting protocol (see below) become a rooted basal, or basal division.

We create rooted cuttings and rooted basals on a regular basis. This is the process we use to ensure the plants root as quickly as possible.

Remove the cutting/basal with a cut angled at 45°. This increases the surface area of the proximal end and increases the water uptake capacity of the plant. “Proximal end” is science-speak for “bottom,” or the side originally closest to the roots. This is contrasted with the “distal end,” which is science-speak for “top,” or furthest from the roots.

A Nepenthes sanguinea with the proximal end cut at a 45° angle.

When possible, cut the stem underwater. This prevents embolisms from forming. An embolism is when an air bubble forms inside the stem.

Reduce the surface area of the leaves by roughly half. Since a cutting/basal has no roots, it has a hard time absorbing water. Reducing the surface area of leaves reduces the rate at which a plant loses water, relative to how much water it is taking in. This is known as “transpiration”.

Pot the cutting/basal in a media that has high water retention. We prefer our sphagnum moss mix for most cuttings.

The Nepenthes sanguineae is potted and ready to be placed on the propagation bench.

Keep the cutting in an extremely water-rich environment. Our cuttings are place on a special propagation bench that mists every 15 minutes for 10 seconds. For most home growers, placing the plant in a sealed plastic bag with a small slit for airflow will work fine.

And that’s it! Allow several months for the plant to root, and you’ll be left with a new, healthy plant.

A Nepenthes xBriggsiana propagated at an earlier date. Now it has a full root system!

† There are instances in which a self pollinated plant can be genetically distinct through mutations from its parent. Sexual reproduction and pollination more broadly will be covered in a later post.

Added to the Cart

Item is in your cart and ready to grow!